1. I was led to write this after being dragged around the Capodimonte art gallery by an expert. My legs cried out for relief —maybe being kneecapped by the mob— when Expert asked me to identify a painting and artist. This had happened to me before and I had guessed Caravaggio (alias Michelangelo Merisi) and been right —realist, starkly colorful and violent to the extent that there was a detached head in the painting. This one was very similar: spectacular colors, realist and a human head in the process of being amputated. I guessed Caravaggio again, but this time Mike let me down (although it did turn out to be a "Caravaggist").

"Haaa!" said my inquisitor. "This is by a woman named Artemisia Gentileschi," she crowed triumphantly, for, indeed, my inquisitor was a woman. That did get my attention, so I wound up learning a little bit about great women painters in Italy and also something about a kind of Jewish literature I wasn't sure what to call and also a few very big words, which I now flaunt with abandon (before abandon flouts my memory, which is bound to happen).

Gentileschi (1593-1653) got my attention because (1) she spent much of her life in Naples; (2) her paintings were not at all what her contemporaries expected of a woman; (3) of her personal courage in the face of outrageous treatment by the society she lived in; (4) of the fact that she has become legendary, the subject of books, films and essay after essay of feminist theory. She is legendary. As it turns out, I may be the only one I know who had not heard of her. (I took a survey. I stopped when the first 6 persons I asked knew all about her.)

Artemisia Gentileschi was born in Rome and became a painter like her father, Orazio Gentileschi, the prominent Tuscan painter of the Baroque. Her work displays the "male strength" of many artists of the generation after Caravaggio exploded on the European artistic scene. Italian art critic Roberto Longhi wrote in 1916 that Artemisia was "the only woman in Italy who ever knew about painting, coloring, doughing and other fundamentals". (Longhi no doubt thought he was paying a compliment, but he was wrong about "the only woman" part; Sofonisba Anguissola (1535-1625), Lavinia Fontana (1552-1614), Giovanna Garzoni (1600-1670) and Elizabetta Sirani (1638-1665, who died at 27 and who, they said, "painted like a man," paying her the ultimate compliment!) are at least a few other great women artists from the 1500s and 1600s in Italy.


[added Jan. 2021. See item #2 on this page on the Advancing Women Artists Foundation ]

In any event, Gentileschi painted rebellious and powerful figures, often strong women. She moved to Naples in 1630 and then she moved with her father to England, where he died; she left during the English civil war in the 1640s to return to Naples. She apparently died in Naples in the great plague of 1656. The "outrageous treatment" I spoke of was the episode in which she was raped by one of her art tutors, Agostino Tassi, in Rome when she was 18. She pressed charges against her rapist, but a charge of rape could stand only if the woman could prove that she had been a virgin before the episode, so they tortured her (!) with thumbscrews until they were satisfied that she wasn't lying. Her rapist was convicted but, to my knowledge, did not go to prison.

Artemisia was the first woman accepted into the Accademia delle Arti del Disegno (Academy of the Arts of Drawing) in Florence. She painted almost 60 works, a few of which are in Naples. One of them is the one I mis-guessed to be by Caravaggio. It is a smaller and slightly different version of her painting in Florence of Judith Beheading Holofernes. (The photo, above, is of the painting in Naples.)


This painting by A. Gentileschi is entitled
Self-Portrait as the Allegory of Painting.
It is from the the years 1638-9.
It is assumed to be an accurate self-portrait
of her. It is held in the Royal Collection, the
private art collection of the British royal family.


Judith is the second heroine of this brief entry. The Book of Judith is one of the great examples of early Jewish story-telling. Like the Book of Tobit and some others, they are not part of the canonical Jewish scriptures collectively termed the Tanakh, an acronym from the initial Hebrew letters of the three traditional subdivisions: the Torah ("Teaching", also known as the Five Books of Moses), Nevi'im ("Prophets") and Ketuvim ("Writings") —hence TaNaKh. (This Hebrew Bible is what Christians term the Old Testament.) Such stories, however, are used to teach about patriotism, honor, piety, etc. The Book of Judith is likely to have been written (probably in Hebrew) around 100 BC and is a good tale of a woman taking up arms and slaying Holofernes, the leader of the forces that had invaded her nation of Israel:

[6] But the Lord Almighty has foiled them by the hand of a woman.
[7] For their mighty one did not fall by the hands of the young men,
nor did the sons of the Titans smite him, nor did tall giants set upon him; but Judith the daughter of Merari undid him with the beauty of her countenance.
[8] For she took off her widow's mourning to exalt the oppressed in Israel. She anointed her face with ointment and fastened her hair with a tiara and put on a linen gown to deceive him.
[9] Her sandal ravished his eyes, her beauty captivated his mind, and the sword severed his neck.
[10] The Persians trembled at her boldness, the Medes were daunted at her daring.

That scene has been painted since the Middle Ages by many others besides Gentileschi, including Caravaggio, Giordano, Botticelli, Rembrandt and Gustav Klimt. The episode has been the subject of such widely disparate treatments as Judith of Bethulia, a feature-length silent film by D.W. Griffith in 1914, and Betulia liberata ("The Liberation of Bethulia") an oratorio in 1771 with music by 15-year-old W.A. Mozart and text by —who else?— Metastasio. (Bethulia is the fictional name of the city in the Book of Judith where the episode takes place.) Literary treatments are countless. Judith's appearance in European Christian literature occurs prominently in the next-to-last chapter of Dante's Divine Comedy (i.e. Paradise; Canto XXXII) where Judith sits in the presence of the Blessed Virgin:

Who sits so beautiful at Mary’s feet.
The third in order, underneath her, lo!
Rachel with Beatrice: Sarah next;
Judith; Rebecca; and the gleaner-maid,
Meek ancestress [Ruth] of him, who sang the songs
Of sore repentance in his sorrowful mood [David].
—trans. by Henry F. Cary for The Harvard Classics.

Such Jewish story-literature is generally termed "apocryphal" by both Jewish and Christian sources. The 1906 Jewish Encyclopedia (sources, below) includes Judith in the group of "Historical Apocrypha." The big words I learned? Such literature may also be called "deuterocanonical" by Christian Biblical scholars to describe certain parts of the Christian Old Testament that are not part of the Hebrew Bible. The term means "second canon" and has been used since the 1500s. Also, in Eastern Christian scholarship they may use the Greek term Anagignoskomena ("things that are read"), and if you want to say "Gesundheit!" after that, I won't stop you. And if you want to believe that Artemisia is hacking off her rapist's head in that painting, I won't stop you there, either.

note: In the Book of Judith, she does the deed unaided and then goes outside and hands the severed head to her maid, who puts it in a sack. I don't know why many versions of the episode, including Gentileschi's, show her being assisted by her maid in the decapitation.

note: The cited text from the Book of Judith is the translation from the Revised Standard Version of the Bible, published by the National Council of Churches in sections, beginning in 1946. The apocryphal books (including Judith) were added in 1957.

note: The Jewish Encyclopedia distinguishes Apocrypha from Pseudepigrapha, but I don't know why. (See? It's starting to fade, already.)

"Apocrypha," "The Book of Judith" and other entries at Jewish Encyclopedia.com

The self-description and mission statement of the AWA: 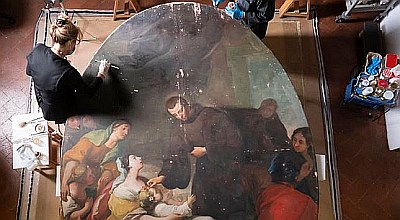 The Advancing Women Artists Foundation (AWA) is an American not-for-profit organization with headquarters in Indianapolis, Indiana, and Florence, Italy. AWA is committed to identifying and restoring artwork by Florence's female artists in the city’s museums, churches, and storage facilities. The foundation achieves its mission through sponsoring restoration of artwork, and promoting research on female artists. As of 2018, AWA has restored 61 paintings and sculptures from the 15th century to the 20th century. Myriad paintings and sculptures by ground-breaking women artists have been overlooked for centuries and many works are currently in need of restoration. Compelling artistic treasures continue to be a silent, undiscovered part of the city’s creative heritage.Through education (lectures, books, seminars, and conferences) and by exhibiting these works in Florence and abroad, we can show this vital cultural legacy and its importance in Florence, in Italy and in the world.


The website is extensive and well-done and has detailed biographies of 22 women (with samples of their work) from the period of the Florentine Renaissance into the 20th century.

AWA photo snip, above, is by Francesco Cacchiani/AWA