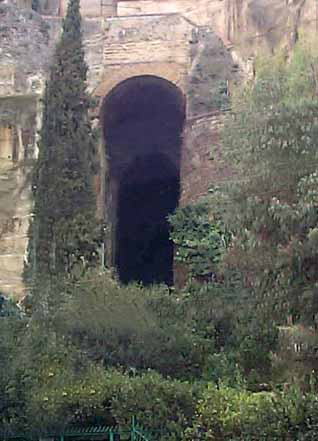 The Tomb of Virgil & the Neapolitan Crypt

Across the street from the Mergellina train station is an historical park known as The Tomb of Virgil, the traditional last resting place of this immortal Roman poet, who spent  much of his life in the city of Naples. Legend says that the poet —also renowned as a sorcerer— called the adjacent tunnel (image, left) into existence by his powers. (It may also have been Lucius Cocceus Auctus, the great Roman engineer who built the nearby Seiano Grotto and many of the fortifications of the Roman Imperial Port in Baia.) The tunnel is also called the Neapolitan Crypt. Whether or not the author of The Aeneid is actually buried here, another, much more recent, poet is (photo, right): the most famous of all Italian Romantics, Giacomo Leopardi, who died in Naples in 1837.


Tradition says that this is where Virgil, himself, expressed the desire to be buried and there have been various inscriptions to that effect over the centuries. None have survived, but various Roman sources at least make that claim. Statius (a rough contemporary of Virgil) wrote, for example: "At Virgil's honoured tomb I sit and sing./ Warmed by the hallowed spot, my muse takes fire" (Silvae, iv.4)  Indeed, Roman consul Silius Italicus (c. 28 – c. 103) became obsessed with the property and bought it. Pliny, the younger, tells us that Silius celebrated the anniversary of Virgil's birthday with more solemnity than his own and "used to approach the tomb with as much veneration as if it had been a temple." The purported tomb of Virgil (photo, below, left) is visible from with the entrance to the tunnel. It is some height above the modern level of the road, but it does correspond to the road level of Roman times (see comments, below). There is a now a plaque on the grounds inscribed with a few lines from a longer work by Leopardi, which he wrote in 1831 during his stay in Naples. They start: "In Naples, near the tomb erected to Virgil..."

From within the park, itself, you have a view of the entrance to the tunnel built by the Romans in the second century B.C. to connect Naples and Pozzuoli. The tunnel was intended to improve the communications between Puteolis and Neapolis (Pozzuoli and Naples). In the first century BC, Puteolis had reached the height of its military and economical importance and was the largest commercial harbor of the western Mediterranean. The city was connected to Neapolis by the old via Antiniana, dating back to the settlement of the first Roman colony in Puteolis (194 b.C.). The Crypta was dug through the hill of Posillipo, a tuff ridge extending from north-east to south-west and running to the sea, where the promontory separated the bay of Naples from that of Puteolis. The tunnel made the route easier and faster from  Pozzuoli to the villas on the Neapolitan coast between Mergellina and Megaris (the present Castel dell’Ovo). This is the tunnel, or grotta, referred to in the name of this area of the city, Piedigrotta —"at the foot of the grotto". This tunnel was used on and off until well into the 19th century before being superseded by the two modern tunnels used by the traffic of today.


How the Neapolitan Crypt has changed
over the centuries. Graphic is from the
work cited in the first paragraph (below).

In looking at various prints and sketches of the eastern entrance to this tunnel (photo, above, left) done over the centuries, one is struck by the great variation. This is due to the fact that the tunnel has undergone extensive modification since the time of the Romans. In The Crypta Neapolitana [sic]; A Roman Tunnel of the Early Imperial Age, the authors* point out that...

The present configuration of the tunnel is the end result of a number of interventions and of the subsequent collapses. The original Roman cross section was 4.5 m wide, to allow the passage of two carts, and probably 3.5 to 4 m high, with vertical walls and cylindrical vault. The roadway was not paved...

The first documented major change was made by the Aragonese in 1445; they lowered the floor of the tunnel by about three meters from what it had been under the Romans. There was another modification a century later and others under the Bourbons in the 1700s and 1800s. The floor of the tunnel in the late 1800s was as low as 10 meters (30 feet) below the Roman level. In the 1930s, engineers raised it back up to the current level (about 6 meter below the Roman level) by filling in the excavations of earlier centuries. Thus, depending on which of the many travel guides to Naples from, say, the 1800s you decide to open, you get renderings of the eastern entrance that are hard to place on a scale of accuracy or authenticity because you never quite know which chronological version the artist is trying to convey. The one in the image shown (on the right) appeared in Rambles in Naples by S. Russel Forbes, 4th edition, T. Nelson & Sons, London, 1893 (also the source of the image below). That "original Roman cross section" is beneath the brick arch at the top in both the recent photograph (top left) and this older etched print. The etching can only have been done from a view of the entrance well before any twentieth-century fill was loaded in to raise the floor.

"View of Naples from Virgil's Tomb"